I don’t really remember the car ride from the obstetrician but I know I would have called mum and I know she would have cried.

When we got home I went to my safe space – the bath – and in there I sent a text to my editor at the time, Tory. Rather matter of factly I explained that I was 9 weeks pregnant but that my baby was measuring small and there was no heartbeat and that most likely my baby was dead and could I please have Thursday afternoon off to go for a scan?

“Take as much time as you need, but Leigh, this isn’t a small thing. Don’t make the mistake of pretending this is no biggie. We’ll take care of whatever you need work-wise.”

(From that point on Tory – who knew firsthand the hell of infertility – would become such a comforting source of both information and understanding. I’ll always be thankful I had a boss in my corner in those coming months who *knew* and I didn’t ever have to say anything.)

I read Tory’s words a few times over and at that point I went from numb to feeling my heart catch up with my head. I got out of the bath and found Rich in the kitchen. The tears ran down my cheeks and he held me.

We stood like that in the kitchen for a very long time.

I ended up working the two days between Monday and Thursday from home. On the Tuesday Rich went into work to tie up a few loose ends before coming home to be with me. When he got back he said “I cried when I told my boss,” and it was at that moment I remembered this was his baby and his pain, too.

He fed and watered me while I worked on auto-pilot those few days.

He gently suggested I take a shower.

I knew what had happened and I knew the outcome and still I ran the scenario over in my head, on a continual loop, where maybe the embryo implanted really late, or maybe I entered the dates in Clue wrong. I tried so hard to not let hope in – to fight it away with logic and facts – but hope is a weed.

It was then I discovered the forums. Dormant chatrooms full of acronyms and desperation and exceptions to the statistics. Threads from 2009 and 2011 full of women hurting. Women bragging. Of stories and questions and hope. Of despair.

These forums are a graveyard.

They made me feel a less lonely. 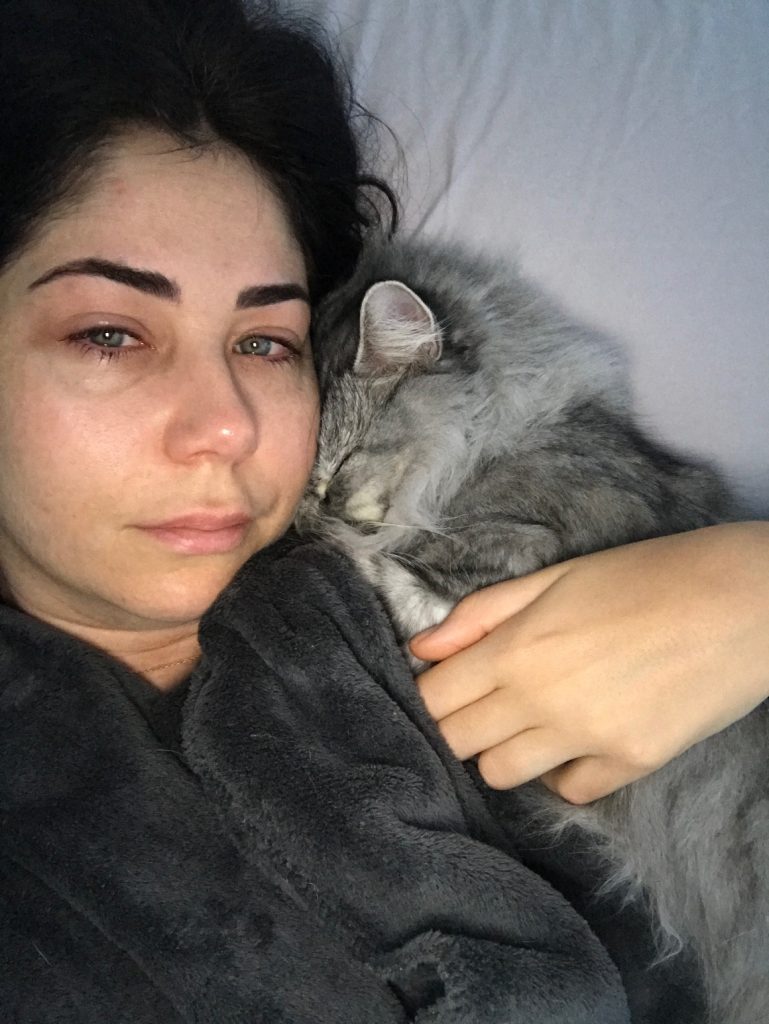 This is what miscarriage looks like. (and shoutout to all the pets who know. Animals are one of the greatest gifts afforded to humans.)

The scan on Thursday afternoon confirmed our baby’s fate – I had had a missed miscarriage – which is when you’ve lost the baby but have not yet started to bleed.

The obstetrician explained the three options we had. We could wait it out and I’d eventually miscarry naturally – a blood test could tell us roughly when that would start. I could take some pills which would bring on the miscarriage in the next 24 hours. Or I could have a dilation and curettage (D&C), where they put you under general anaesthetic while they dilate the cervix to remove the contents of the uterus.

I opted for the D&C, and as the obstetrician gave us instructions of where to meet her that evening at the hospital so she could perform the procedure (on her day off) I felt so much comfort from her sincerity and tact. I was so grateful. This is a conversation she has often, likely weekly, yet she made me feel safe and like my baby mattered.

My physical recovery from the D&C was easy, just some cramping and blood – hardest part for me was that I wasn’t allowed in my safe space for 3 days – no baths.

But mentally, it’s was really hard to be gentle with myself at the very time I needed it.

I knew logically and factually that stress can’t cause miscarriage and that it was overwhelmingly likely to be a chromosome abnormality.

Yet my internal dialog questioned getting the flu shot. Did I kill my baby?

My reaction to that text message. Did that kill my baby?

I switched to natural products right way and didn’t colour my hair but I still had unlit scented candles in the house.

I killed my baby.

I was struck by how profound the grief of miscarriage was. Although based on a life event with a short and clear start and finish, it doesn’t leave you. The grief goes with you to Woolies. It sits with you in boardroom meetings. It’s silently in you, everywhere.